Message Sent
Thank you for your inquiry. We will respond to you as soon as possible.

Meet your personal financial goals while making a difference for our future.

You are at: Planned Giving > Gift Options > Donor Stories 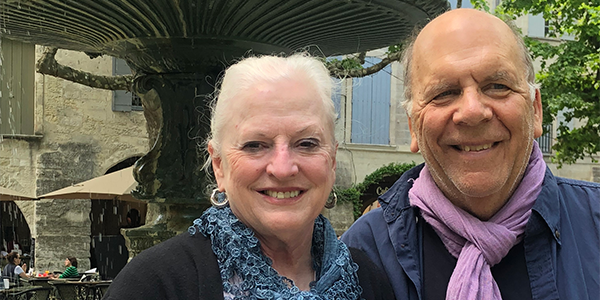 Craig Kuehl '66, a longtime New Yorker who has lived on four continents, describes himself as "a naive 17-year-old kid from a small Iowa town" when he arrived at Cornell College in 1962.

He still remembers classes he took, as well as important experiences outside the classroom like living in the men's honor residence, Guild Hall; hearing Martin Luther King Jr. speak in King Chapel in 1962; and playing Willy Loman in "Death of a Salesman." A theatre and religion major, Craig also fondly recalls singing in choir and playing in symphonic wind ensemble and the men's marching unit that once performed at Rams football games.

After graduation Craig built a career working off-Broadway and in regional theatres, followed by 27 years as a foreign service officer with the U.S. State Department.

Out of gratitude for his education and what he accomplished with it, he and his wife, Jane Lucas, gave a planned gift to benefit future Cornell students.

"I want to give something to Cornell because it gave so much to me," he says. "I managed through a Cornell education, and just luck, to become an actor and join the foreign service and have a very satisfying career. You have to support an institution that helps you achieve those things."

Craig prefers to let the college determine where the funds are needed. But when asked what he hopes his investments will accomplish, he's ready with an answer.

"If it's for scholarships, I hope it will help students who wouldn't otherwise be able to go to Cornell, and that it would increase the diversity of the student body," he says. "I also hope it might expand the global perspectives of students."

After acting for 15 years, Craig told Jane that he wanted to make more money so they could travel, and she suggested he apply to the foreign service. He passed a highly competitive test and was admitted, which eventually took the couple around the world to posts in Mexico, Tunisia, Switzerland, Cyprus, and Durban, South Africa, where he was consul general during the height of the AIDS crisis and involved in the World AIDS Conference.

Jane had just finished her Ph.D. in psychology when Craig received his first post. Despite her globe-trotting she built a successful career in international public health, principally with the World Health Organization and UNICEF, and Craig refers to his wife as "in many ways the more successful half of the couple."

A highlight of Craig's career was his work to create a United Nations High Commissioner for Human Rights. The process was complicated, political, and took years, but was ultimately successful and impactful, and remains so today.

"Our second commissioner was Mary Robinson, former president of the Republic of Ireland," he recalls. "The commission started with 200 employees and now boasts about 1,300 professional employees who work on human rights for the U.N., with offices in many countries."

In his career Craig promoted human rights, and with their planned gift, he and Jane are promoting Cornell's most deserving students.

Let us help you
with your gift plans